I have personally transcribed this from the original paper and you are free to use it as you like. If you use it on your own webpages – please credit me or put up a link to my blog. If you really like this sort of thing – follow my blog! Thank you!

A relatively short interview today, but telling a strange story I din`t know about the relation between T. Rex and Uriah Heep at that time.
Have a nice read! 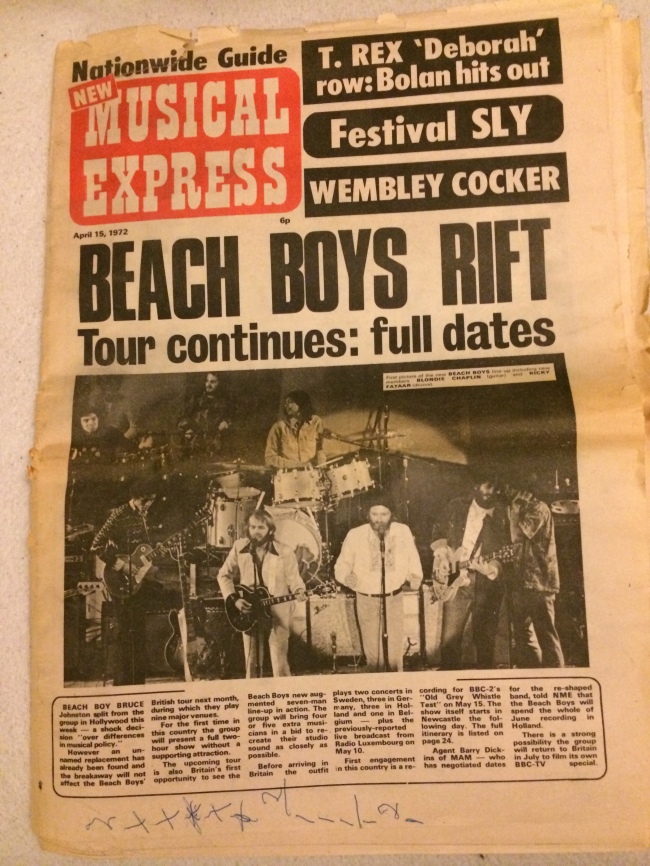 Informants at Kensington Market reported last week the almost unbelievable spectacle of Marc Bolan and wife catching sight of David Byron, lead singer with Uriah Heep, and then hurriedly scampering off in the opposite direction. To say that T. Rex and Uriah Heep are not the best of friends would be the understatement of the month.

Conflicting reports after a Chicago gig reached us here and it ended up as a rather hysterical bitch. That scene has now cooled a bit and I was able to ask Byron the Uriah Heep side of the distorted story.
“Briefly,” said Byron, “at about 4.00 in the afternoon we got a phone call from the promoter, or manager of T. Rex, asking if we`d close the show. Originally you see we were appearing as the middle group.
“We said `no`, and thought it funny they should ask at all. Then we got another phone call asking us to go on first, and again, we refused.
“Then, 10 minutes before we were due to go on stage we were asked to cut our 50 minute act to 35 minutes. We went on and did 40 minutes – got a standing ovation but were told we couldn`t do an encore.
“I think the crowd got pissed off about it simply because an audience can sense if there`s any aggro around.
“Now, looking back on the whole thing I think it`s just funny – the best publicity we`ve ever had.”

Heep may not be rated with the best progressive bands in Britain, but abroad – certainly in Germany – they are. Recently in a conglomeration of European magazines they were voted No. 1 underground band and No. 2 band for the future. And last year they sold more albums in Germany than any other band. But one would assume they would prefer more attention here.

“We`re not bitter,” Byron says, referring to rather mediocre response in Britain as opposed to abroad, “but it just makes us wonder why. `Look At Yourself` (Heep`s last album) didn`t leap into the album charts or anything here but it did have steady sales.
“We seem to be a group who sell albums when we`re on the road – people will come and see us and then go out and buy the album, rather than do it the other way around.”

Heep have now toured America twice – losing money on a first tour and breaking even on the last visit. The next trip, scheduled for June, will see the start of the profit, and all indications are that they could make quite a lot of bread.
“Look At Yourself” re-entered the U.S. album charts during their visit earlier this year and they found a situation arising where people were asking for tickets for the Uriah Heep tour while they were in fact the supporting band on the Deep Purple or Cactus tour.

“Before we went on the last tour we realised we weren`t going to make money”, Byron says, “but it`s an investment just going there because it makes it better the next time you go – and I think now we are beginning to make a name for ourselves there, simply because we have toured.”

The last tour saw a change in personnel – Mark Clarke leaving after the first leg, and being replaced by Gary Thain.
Byron: “The change in line-up didn`t severely change the band in that we didn`t have weeks of sorting things out musically with Gary. He joined us in L.A. We rehearsed for two afternoons and that was it. It`s worked out incredibly well really, and I feel sure we now have the five right members in the band.
“Three are temperamental, two are easy going. I`m not positive what Mark is doing now but I gather he is supposed to be getting something together with Bob Fripp and Jon Hiseman.”

May should see the release of the next Heep album, entitled “Demons And Wizards.”
“The Wizard,” the group`s current single, is a taster from the set, which Byron describes as being “Six light years ahead of the last album.
“We`re about half-way through it now and when I say it`s about six light years ahead I mean that the songs are much better – it`s the first album with real continuity and it`s far more melodic than anything else we`ve done. It`s also the first album we`ve written in the studio and then recorded straight off.”

While Heep undeniably fall into the progressive band tag – unlike other groups who are tagged with that label they don`t just go on stage and rely on a lead guitarist or a sweaty drummer, grimace at the audience and look miserable.
They work hard at getting their audiences at it – and even bother to wear brightly coloured clothes so that in large halls people at the back can see them. And generally they make sure the audience are full of bon hommie. Byron sums it up rather crudely, but perhaps aptly.
“If the chicks and guys can go out after one of our gigs and feel they want to get laid, then we know we`ve succeeded.” Ob la di life goes on…

Look at this amazing poster I found in this number! Would be nice if framed on a wall! 🙂