I think this band was one of the very best of the 70s, and they deserve more credit than I feel that they get. So here`s another interview for you! 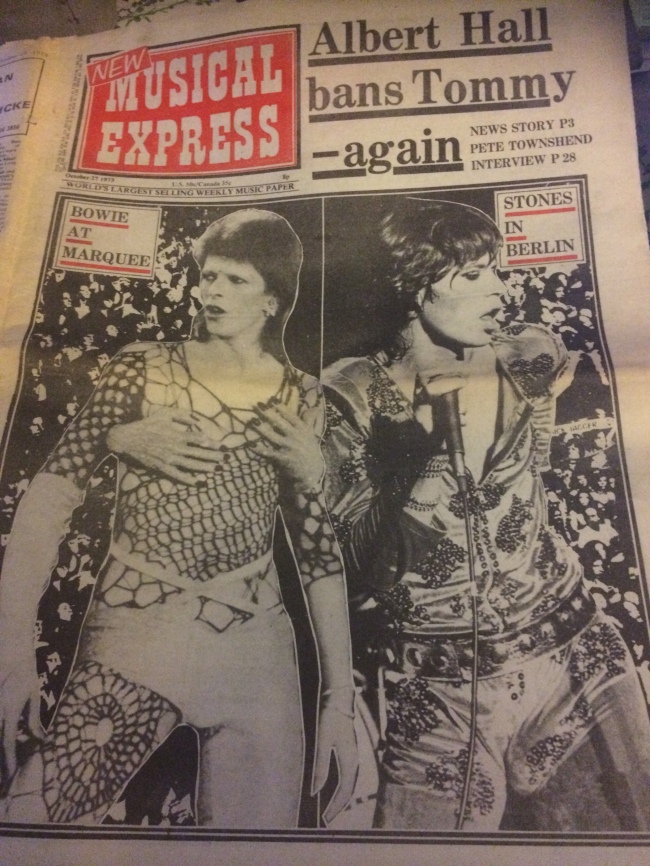 Steve Clarke checks out plane paranoia and pictish pyrotechnics as Nazareth open their tour in Liverpool.

Sometimes it can be a little scary being a rock`n`roller.
Like, when you`re just three days home from an American tour which meant flying two, maybe three times a day – and now that you`re home `n` touring you still find yourself flying. And the aircraft you`re in isn`t a TWA Jumbo Jet but a 15-seater Heron with a fuselage about the size of an economy size toothpaste tube.
Promoter Peter Bowyer – you know, the fella that presents shows and gets his name at the top of the ads – says he chartered the plane for “a giggle”. But Nazareth`s Pete Agnew hasn`t shown his teeth once since he got on board. That is, until he shifts his ass and takes over the co-pilot`s seat and is still sitting there when the damn thing lands at Speke Airport, Liverpool.

Nazareth had arrived home from their third American tour – their first since breaking over here – on Monday, which gave them three days to relax and rehearse new numbers for the tour which opened on Thursday. A Top Of The Pops appearance cut the three days down to two and, what with one thing and another, they never really got down to rehearsing those new numbers. And at ten minutes past six on the coach to Liverpool Stadium drummer Darryl Sweet isn`t too sure whether there`s going to be any new numbers at all. In fact, it`s going to be all down to a rehearsal before the gig. He admits it`s a ridiculous situation but one that couldn`t really be avoided since final mixing of the new “Loud `n` Proud” album didn`t take place until six hours before the group were due to fly to New York.
According to Sweet, the album is an improvement on “Razamanaz” – a record which the group thought it would be difficult to better. Once again ex-Purple bassist Roger Glover produced the set, which contains five original compositions and three covers – Little Feat`s “Teenage Nervous Breakdown”, an 11-minute version of Dylan`s “Ballad Of Hollis Brown” – and the song which has been lifted as a single, Joni Mitchell`s “This Flight Tonight”.

Of their version of “Hollis Brown” Sweet says: “It`s the biggest thing we`ve ever tackled. For four guys it`s quite an achievement. It`s synthesised sounds without a synthesiser.” Of the album as a whole he reckons it`s easily the best thing Nazareth have recorded: “The performances individually and collectively are so much better. The numbers are great. The production is another step up as well.”
Nazareth`s recording of “This Flight Tonight” came as something of a shock to me. I mean Joni Mitchell and Nazareth are pretty strange bedfellows. But all the band dig the lady`s music, though it was guitarist Manny Charlton`s idea to do it. But didn`t they think their version might offend a few of Joni`s admirers?
“We are Joni Mitchell fans,” replies Sweet, hardly getting the words out before Agnew adds: “I don`t care if Joni Mitchell fans like it. Joni Mitchell does and that`s the main thing.”

But how come, fellas? You mean she`s told you she digs it? They answer in the affirmative, and they didn`t just meet Miss Joni once but twice at A and M`s Hollywood studios. The studios known as “The Lot” are now quite a tourist attraction as they were converted from Charlie Chaplin`s old film studio. “We were given an extensive tour. `Come and see this – this is where Charlie did this, where Charlie did that`. The guy taking us round said Joni Mitchell was in the studios and said `Come on let`s just barge in`. Of course we were a bit shy and said no, not if she`s recording. We didn`t want to interrupt anybody`s recording session. He said `No, she`s listening to play-backs – she`s already recorded. We`ll be okay`.”

Nazareth did as the man said and found Joni to be “a very straightforward, down-to-earth person”. When they told her they`d recorded one of her songs naturally the lady was interested, so two nights later the boys took along a copy of “This Flight Tonight” for her and producer Henry Lewy to listen to. The verdict? “She thoroughly enjoyed it and Henry Lewy flipped. Especially at the head-phone piece.” Sweet adds that, as with much of Nazareth`s material, the construction of “This Flight Tonight” is Roger Glover`s.
“I would say Roger`s forte is arrangement – the jig-saw work.” 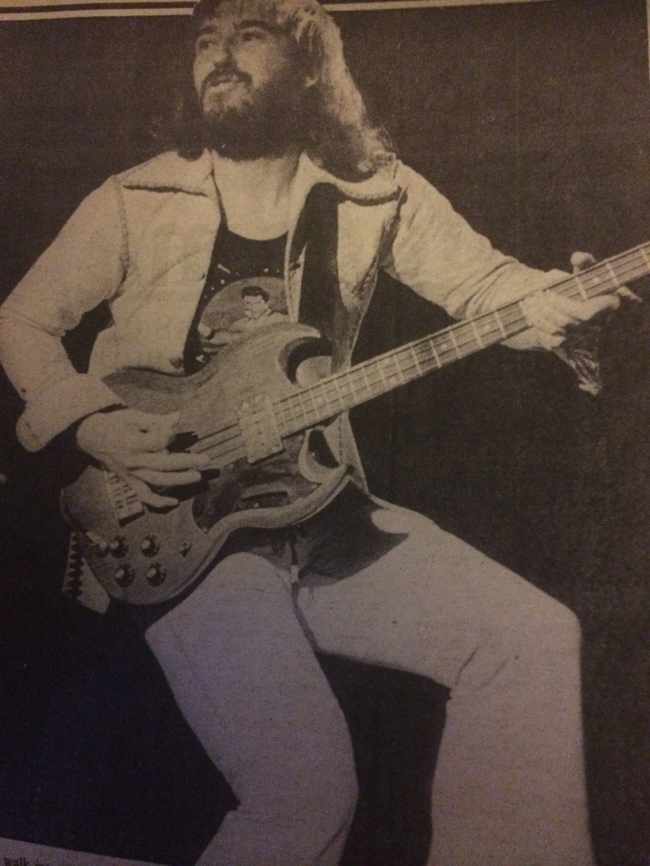 In America Nazareth have yet to make a sizeable impact, although it would be untrue to say they`re a nonentity over there. Far from it. “Razamanaz” has featured in the album charts and the band are best known in the Mid-West.
Mostly though, Nazareth were opening on their tour – though they did top at three club dates. Sweet says it was their most successful tour to date and there was recognition for the “Razamanaz” numbers. Being so close personally – Sweet and Agnew have been playing together for 12 years, Agnew and McCafferty went through school together and Charlton has been with Nazareth four years – the pressures of touring America are less likely to affect Nazareth than, say, a band that has only been together for a year or so.
“So many groups get together for six months and they don`t really know each other as people and the pressures of touring the States can wreck them. We`ve all known each other for many years. We think along the same lines on most things. Democracy is the keyword when it comes to group decisions. Everything goes to the vote. If I say `no` and three say `yes` then yes is the answer,” affirms Sweet.

This British tour is Nazareth`s second this year and the band hope it will consolidate their position as a major musical force in the country. As with the last tour, the gigs are coincidental with the release of a new album and single – which means Nazareth`s management have got it pretty well sewn up.
With only an hour or so to rehearse new numbers at Liverpool Sweet is grinning like a baby when he announces: “At ten past six I told you I didn`t know whether we`d have any new numbers for tonight. It`s now quarter past eight and we`ve got four.”

Liverpool Stadium alternates between presenting wrestling promotions and rock shows. The audiences are notorious for getting a little rowdy and last time Nazareth played the stadium a whole front row of seats was demolished – which probably accounts for the “Important – no standing on the seats” notice which confronts you immediately as you walk into the stadium.
The backstage area is a typical opening-night-of-the-tour scene. The champagne flows freely and a few greetings telegram lay scattered amidst the guitar cases as the band hastily run through “This Flight Tonight” again. They`ve never played it before live and it is a pretty tricky song.
Silverhead are supporting on the tour but they fail to show. We hear their van has broken down somewhere between Devon and Liverpool.
John Lennon`s “Imagine” album is the last record on before the group, which is a pretty nice thing to play considering where we are.

But when the band come on the reaction is spontaneous. The audience – average age around 14-15 – immediately rise from their seats. McCafferty comes on last and the crowd reserve a big cheer for him. They dig Dan a lot in Liverpool. Sweet bangs out the almost-Bo Diddley rhythm and they`re into “Night Woman”.
Nazareth are the complete opposite of the sophistication and so-called decadence of Bowie or Roxy Music. They have little style or presentation, their music reflecting their earthiness. Say what you like – they don`t look like rock`n`rollers. Nazareth are the archetypal working class rock`n`roll band.
America has undoubtedly tightened them up and the Liverpool gig is the best I`ve seen them play. Their handling of the new numbers – considering the time they haven`t had to rehearse them – is a credit to the band. Even with Agnew`s harsh bass lines prominent they`ve turned “This Flight Tonight” into a boogie number, and their own two new compositions “Turn On Your Receiver” (the theme tune to Bob Harris`s Monday programme) and “Go Down Fighting” are relentless pieces of rock.

They`re not 100 per cent heavy metal though this aspect is an important part of their make-up. “Broken Down Angel”, which has the crowd singing along football-terrace fashion, is in the Rod Stewart “Maggie”/”You Wear It Well” vein.
And their version of Little Feat`s “Teenage Nervous Breakdown”, with Agnew adding back-up vocals, is once again pure rock`n`roll. For once, an encore seems really wanted and they do three numbers before returning to the dressing room. There`s more champagne this time and their co-manager Bill Fahilly – who`d make a great Falstaff if he ever found himself out of a job – proclaims triumphantly: “They played bloody great! I don`t give a damn what the Press says.” And you know what? He`s right. Besides I wouldn`t like to argue with a man that size. 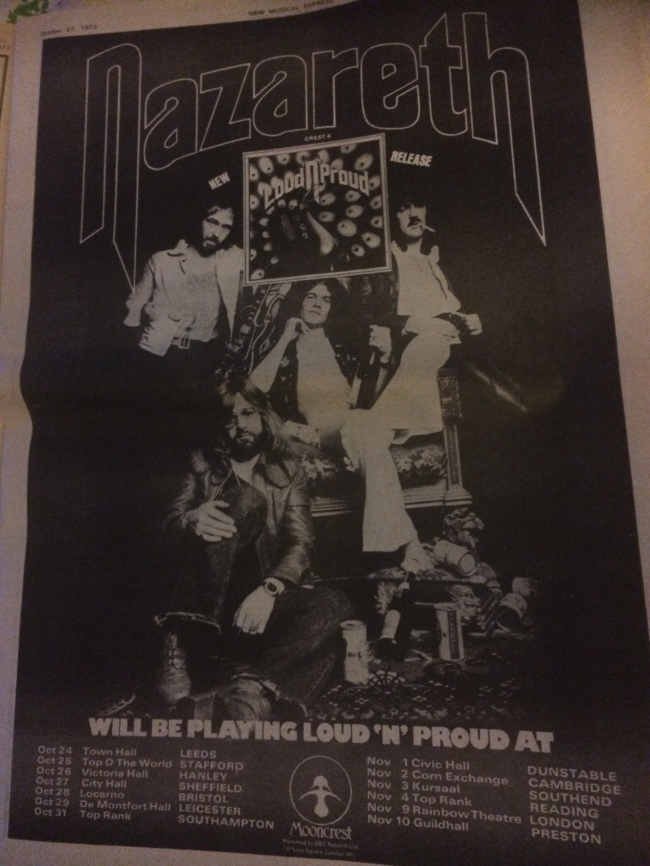 Nazareth – on top of their game!

This paper is sold!