You can`t have a credible blog with artists from the 70s without having an article on Sweet. They had a lot of success, but always seemed a bit frustrated to be known for their bubblegum-hits, mostly written by the duo of Chinn and Chapman.
The album that Brian mentions is going to be called “We`re Revolting” doesn`t exist. Instead it was called “Sweet Fanny Adams” and is an excellent hard-rock album. Highly recommended! 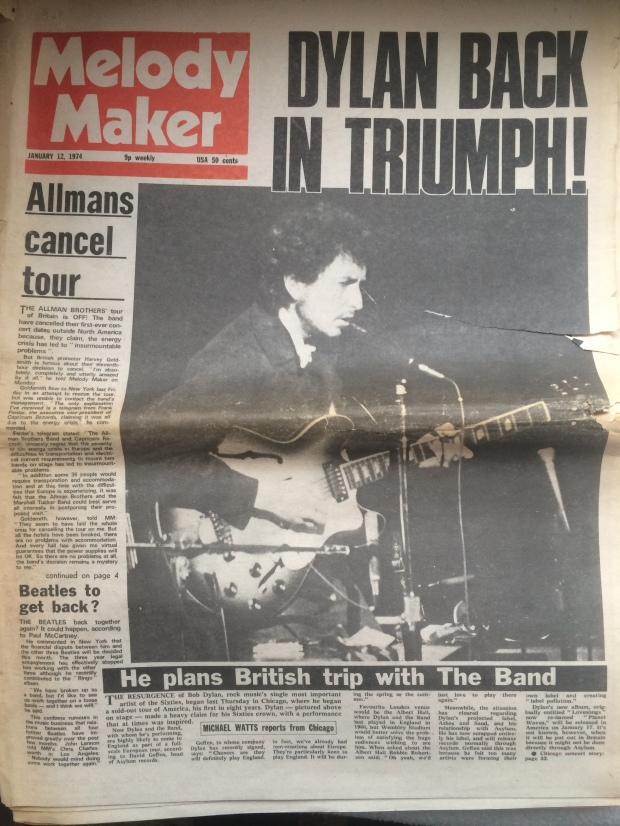 Jeff Ward talks to the band likely to raise hell in Britain`s concert halls next month.

Phallic symbols, film of a stripper, a “rape” attempt on stage, a song that warns their fans: “If we don`t f— you someone else will!” Unsubtle? Indiscreet? Well right, that`s Sweet.
Their hard `n` horny, sexist-sadist road show embarks on a full-scale British tour at the end of next month – that series of gigs before Christmas was just a warm-up, a tickler, a dummy run. It`s likely to get bigger, and…er…better?
The warm-up tour climaxed at London`s Rainbow where the show was recorded live for the soundtrack of a BBC documentary on the band to be shown on January 28 and February 1.
London witnessed for the first time the possible extent of Sweet`s overt act, which some might say was overblown low camp, but about which others are raving. Which side are you likely to be on?

Sweet devised the whole act themselves, planned the films, effects and costumes, and came up with the theatrics.
As rock `n` roll shows go it`s original in its totality, its mixed media. It`s blatant, but then they`re only underlining the vital sex drive which has always been an essential ingredient of rock music.
What`s behind it?
Singer Brian Connolly said: “Well let me tell you, the Rainbow wasn`t a planned thing on the warm-up gigs, which were to see what reaction was like. But the fans asked why we weren`t playing London.
“They knew we were doing six other places in the country and they wanted to know why a lot of them couldn`t see us in London.”

However, about the act itself, Brian admitted that if the sexual overtones appeared blatant then the band were overdoing things, though the act was “almost one hundred per cent” them, every way.
“I`m there, but I`ve never seen the act. If the sexual thing is coming over to that extreme then we must be overdoing it, but that can only be from the excitement of playing.
“Musically, it`s what we want to do. We`ve put the hits in because people deserve to hear the hits. We`ve put our tracks in because we want them in, it`s what we`re writing and what we`re into.
“Theatrics are what the group`s into. It`s not attempting to shock, we do it because musically it`s what we want to do. In this day and age do you think without the visuals they`d watch? Name me another band that`s got the older audience that doesn`t use visuals. I can`t think of any.
“The band`s getting more into rock; it`s more aggressive, the new stuff, so there`s more to come. As long as we can keep creating basically the music, of course we can keep up with the visuals. We can add more and more.

“It`s also showmanship. What is an actor but a person playing a part with scenery and lighting, creating an atmosphere? We`re creating an aggressive rock sound. The visuals are essential; to be quite honest, if all they want to do is listen they can put an album on.
“Probably they treat some of it as a laugh, which it`s meant to be. The ones we dig, I think it`ll be maybe fifty per cent of audiences, are the ones who appreciate the music. But it`s great to think that everyone`s enjoying themselves.
“I don`t think there`s a danger of us becoming too heavy, musically or visually though, because we`re all from the same sort of background and basically we can`t get away from that old rock`n`roll.
“We see faults in the act we`ve got. But when you compile an act and work it all out you can`t really, until you`ve done it several times, you can`t notice yourself where things are wrong. In fact, Mick`s drum solo is too long and he`s going to shorten it.

Sweet`s new album, to be titled characteristically, “We`re Revolting,” should be out next month. Six of the nine tracks are completed.
“The title track is one of the three remaining to be done.
“Instead of being `sweet` we`re going to try and put over an album sleeve with the group on the front but a grotesque cartoon on the back, warts and everything. `Revolting` can mean `we`re horrible` or that we`re revolting against `Funny, Funny,` if you like.
“We`ve come a long way from that period and taken a hell of lot of criticism, slagging and downing, musically and every other way. Singlewise the musical standard has remained the same, the only difference in the last three or four singles as opposed to the first five or six being that the Sweet arranged them, they`re our ideas and our expression.
“We`re not puppets like we were on the first five, but we`re still not getting away from Chinn and Chapman`s basic ideas, basic melody. Therefore it`s still going to sound similar.”

The forthcoming tour will take in 25 venues and will be basically the same show, modified slightly in places to make the pace just that bit faster. There`ll be more equipment though, another seven-ton truck on the road. “It`ll be the same act, but with possible two or three different tracks probably from the new album. The lighting will be a lot stronger. We`ve had a lot of trouble getting explosives and things like that.
“We`re promoting the tour too, we didn`t promote the last one, we just booked it from six promoters. I think it`s the same as any band, you probably find most of the name bands promote their own now through promoters. Not only that, I suppose we`ve got four or five people working on that side of the business, we don`t have a manager for Britain, so why not promote it ourselves?

“Believe it or not, we haven`t earned a bean from 1973, not a penny, not from live gigs. I know promoting ourselves will be the remedy for this, because I know how much the promoters earned on the last seven gigs, apart from the Rainbow where we split that with the guy who`s the manager there – and it ran at a loss.”