I guess Lars Ulrich of Metallica may be one of this band`s biggest and most famous fans. Metallica recorded the Budgie song “Breadfan” as a B-side during the …And Justice for All sessions. Hopefully the original songwriters earned a bit of money from that one. Feel free to tip Mr. Ulrich about this article – I guess he would like to read it if he haven`t already!

No birds
No booze
No glitter
No money
No…life at all is it? So what motivates bands like BUDGIE? Yes, you`ve guessed it folks – the answer is integrity

Playing In The Band
By REX ANDERSON

Seven years on the road. Hardly a nibble at the charts. Solid following in most parts of the country. The freedom to play what they like. Not a lot of ready.
It could be any number of bands. In fact it`s Budgie, but I thought it`d be interesting to see what life was like for the average musician; the people who are in it for the music and the performance, not for the cars and the glitter, the birds and the booze.
It started as a conversation in a pub about mistakes on stage. Burke Shelley and Tony Bourge were describing recent occasions when they`d slipped.
“Everyone does it from time to time,” said Burke, “Especially if you`ve been off the road for a few weeks recording and you just do one gig – as I did the other week.”
Burke apparently proved worthy of his name, and despite the fact that he leads the band from behind his bass he let them all change into D while he was still pumping out runs in A. “Normally the band notices it and it can spoil your entire evening for you, but you cover up so that the audience shouldn`t notice at all.”

Bourge said that the worst thing – when a band hadn`t played for a few nights – was getting halfway through a number and realising you couldn`t remember how you arranged the ending.
“It always comes back to you at the last moment. When you get there, suddenly it all clicks into place.”
It`s true that mistakes on stage are very difficult to spot because a good musician will always try to cover them up. But another musician can spot them – because he is familiar with the expressions that flit across stage when someone plays a bummer.
It`s far easier to make a mess of what you are doing, of course, when your foldback system isn`t working properly. A decent PA and adequate monitors are the biggest problem facing new bands today. Budgie have been using a Marshall set up with a small Marshall desk. But it`s not really big enough for them, and they have been thinking of buying some secondhand bass bins and adding to the desk.

A ready-made PA to suit their needs would involve them in something like £15,000, which the band just haven`t got. So what does the band get?
“We go out for between £400 and £500 a night,” says Burke. “But that has to pay for transport, expenses, road crew, maintenance and so forth. Most of the money is ploughed straight back into the band.”
In fact Burke estimates that the band members make around £50 a week, which isn`t a great deal for working something like a 12-hour day, seven days a week, come rain or shine. Burke remembers having to go on stage with a throat infection because there was a telephone bill that needed paying.
“If the audience were familiar with the songs I don`t know what they thought that night, because all I could do was grunt them out like a soul singer.”

Fifty quid a week may sound a lot of money if you`re still at school or college, but it`s not much for a musician with a wife, kids and a mortgage. Why was it, d`you think, that blue denim became so popular with bands? It wasn`t fashion so much as the fact that that was all they could afford….
The money Budgie makes from publishing is used to pay for things the band needs. There`s no income from the record sales at present because that money was given to them in the form of an advance and is long since spent.
Of course, Budgie are a little different from many bands in that they`re attempting to pay for everything themselves – the instruments, equipment and the van they own. Whereas other bands are tempted by offers from backers to set them up with good equipment.
Burke says he didn`t fancy taking the risk and finding the band tied to an agency or manager who could dictate what they did under the threat of taking their gear away.

We discussed the system in America. There, with each big town having its own vast stadium, it isn`t viable for the band to cart the sort of equipment needed from town to town. Instead they hire it on the spot and the equipment is built to suit the venue.
One major problem with gigging around concert halls is that the PA really needs to be designed for the hall. Inevitably there`ll be some halls where your PA sounds dire. Tony remembers one club in Cardiff that`s notorious for bad sound. The PA is yet to be designed to cope with it.
“I remember The Who cancelled a gig there once because the sound was so bad.”
The American answer to this problem doesn`t work in the UK to any great extent. There are PA hire companies – and very good equipment they have, too – but imagine trying to fit together gear of a standard that would sound equally good in the Hammersmith Odeon, Wembley and the Theatre Royal, Drury Lane.
Budgie, then, are stuck in what Burke and Tony describe as a very pleasant rut. They enjoy being on the road. They enjoy playing the music. They change the set almost entirely every year so they never get bored with what they are doing. They ignore the chart.

This last is unusual. Most bands look forward to the day when one of their records will miraculously take off. Album and publishing revenue will rocket, there will be exposure on TV, the fans will flock to see them and their appearance money can be trebled overnight.
Not so Budgie. They regard that sequence of events with the same cynicism that you do the promises made by Mrs. Jones up the road concerning her forthcoming Premium Bond win. A healthy attitude. The reality is to get to America.
Leo Sayer was commenting this week that on three gigs a week in Britain he just about breaks even, while on one gig a week in the US of A he can make a comfortable living.
The beautiful thing about bands like Budgie is their dedication. They believe in the music they`re playing and are prepared to suffer the hardships for the sake of it. 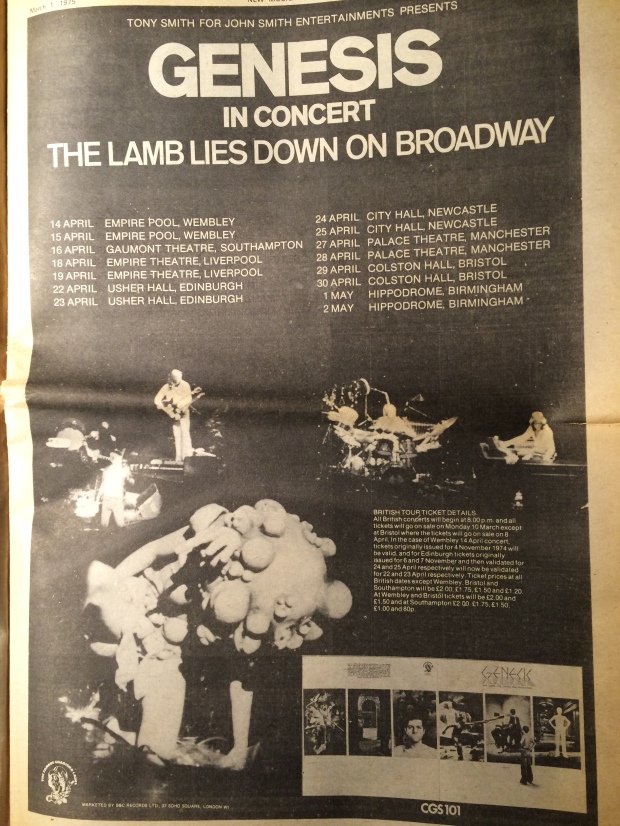