I have regular visits from people reading articles featuring The Who at this site. So for that reason alone it is a pleasure to post an old concert review from the legendary Hammersmith.
Enjoy!

The black monolith (stereolith?) of a PA system towers from floor to ceiling. Onstage The Goodies` Graham Chapman is receiving a hard time from this day-before-Christmas Eve audience, who`re wearing expressions of celebration all over their paper-hatted faces.
It`s the third and final gig of The Who`s Christmas series at Hammersmith Odeon. According to reports Sunday night was great – Monday`s gig a little dodgy. Tonight (Tuesday) they just have to blow everybody`s heads off.
Chapman leaves the audience with a few select profanities. Seconds later, The Who tumble onstage, Moon cartwheeling, and take their positions. Entwistle, a sturdy glitzy carnival with his sequined jacket, is stage right, and Pete`s opposite, wearing a white baggy outfit which looks as if it was pulled on a few seconds beforehand. His face looks decidedly haggard.
Townshend`s arms go into action and his fingers make contact with the sunburst Les Paul, introducing the staccato riff to “I Can`t Explain”.

The music`s okay, but not as powerful as The Who can be. Daltrey`s voice is shot, not as pure as it ought to be. Townshend`s guitar should be louder, but the Entwistle-Moon rhythm section is invincible and pounds along ruthlessly, compelling you to stamp your feet.
Despite these `defects`, spines are tingling and it wouldn`t surprise me if there`s a few wet eyes in the house. Hell, it`s more than good to see The Who onstage at Christmas. All around are faces brimful of joy. I`ve yet to see a band audience relationship like The Who`s; their audiences, no matter what the standard of playing, are always totally entranced by the sheer thrill of seeing Daltrey, Townshend, Entwistle and Moon on stage together again.
It`s not as if all present grew up with The Who – looking around at the audience, it seems to me that Pete Townshend has no cause to worry whether he`s too old to play rock `n` roll. He might look a little weary, but the spirit which he and the rest of the band project is as young and as vital as ever; “the magic that will set you free” to borrow a phrase.
“Substitute” follows, and like the opening number its lyrics are as relevant today as they ever were. What`s the betting that more than a few guys in the audience are feeling just like that tonight? Into “My Wife”, Entwistle`s excellent song from the band`s finest, “Who`s Next”, follows, and the bassist`s voice is in worse shape than Daltrey`s. 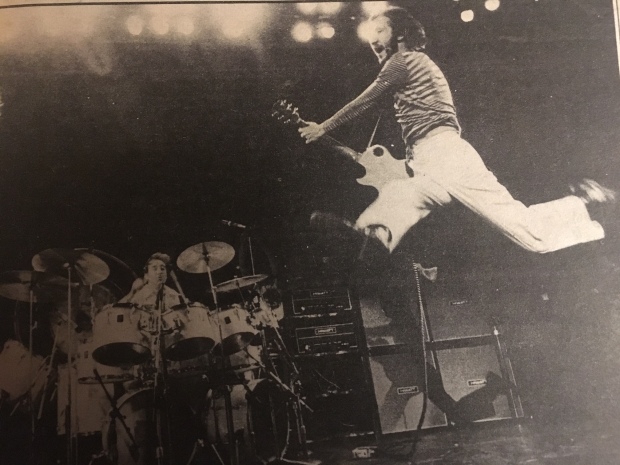 The further into the set, the better the music gets, and by the time of “Tommy” The Who are playing as they should. Townshend has gained the power his playing lacked earlier, and everything that has made The Who arguably rock`s greatest band is being demonstrated here tonight; the pyrotechnics, the dynamics, the band`s attitude towards its audience and its music.
“I`m Free”, “We`re Not Gonna Take It” and “Pinball Wizard” comes as a feast of power chording, and the energy which flows from the band is almost tangible. The first climax of the evening comes with the “See Me Feel Me” sequence, myriads of `lazer` beams being projected from backstage out across the theatre.
The audience erupts, spilling out into the near-stage area.
Introducing “Tommy”, Moon and Townshend had the wit to send the whole thing up, saying it was a piece of classical music when they know damn well it isn`t. Rock opera? Bullshit. Rock and roll isn`t about `operas`, it`s essentially about energy, joy, and most important of all, communication – and this is where The Who are succeeding most of all.
Unlike Led Zeppelin, The Who cry out for an audience to relate to, and there is no barrier between them and their audience. Mostly they`re not about pretensions. They might be a good deal more affluent than their audiences, but get them on a stage and their richness disappears and you know that at one time in their lives, they`ve lived the kind of life most of the audience are now living.

Unlike The Stones, there`s no celebration of evil and no jet-set ambience.
Daltrey might not be such an amazing performer as Jagger, but he is a lot more touchable as he trots around onstage like a toy soldier.
The only time on Tuesday The Who weren`t one hundred per cent convincing was during “My Generation”. I understand why they have to play it, yet when they do it`s as if they realise it`s one damn big lie.
Otherwise it all makes sense.
Part way through the song the band goes into one of their flop singles “Join Together”, and the song is genuinely apt. By that time the audience`s inhibitions have disappeared.
The following “Summertime Blues” is true to the spirit of classic rock `n`roll. Oddly the penultimate number is “Roadrunner”, at the end of which Townshend widens his guitar tone, even turning in a few Beckisms.
Their set closes with “Won`t Get Fooled Again”, a classic post-Woodstock statement. It`s played majestically, climax after climax, and perfectly timed so that balloons and fake snow fall from the ceiling as the music bursts into its final crescendo.
Townshend hurls his guitar at the amps and it`s over.
If you thought rock was dead at that moment in time, you must have been born in the wrong age. Easily the year`s best display of rock `n` roll.

I have personally transcribed this from the original paper. If you have a music-related web-page where this fits – please make a link to the article. With a great, big thank you to the original writer of the article from all of us music fans!

1. Send me an e-mail, if you are interested. Send it to: geirmykl@gmail.com
2. The offer should be 15 $ (US Dollars) to be considered. (This includes postage).
3. We conduct the transaction through my verified Paypal account for the safety of both parties.