Hope you like this short, but very detailed article when it comes to their equipment. One of the bands that continually prove that you can have a long and great career without being “commercial”. And that`s great!
Enjoy!

Yes move in a new direction

One of the most heartening things to have happened over the last year or so is the gradual emergence of Yes out of the comfortable but rather unsatisfactory position of being a band with a small but devoted cult of followers, to their present status as one of Britain`s most popular live bands who also have one of the best and most successful albums of recent months – “The Yes Album”.

Those who have followed the progress of Yes since their first album knew it would happen sooner or later, but it is nice that it has happened now because not only is “The Yes Album” by far and away the best thing they have done to date, but it is high time they got the wide recognition they deserve.
However, it is often as well for a band to remain in relative obscurity for a time, because it gives them the chance to really work out their music and sort out any problems they may have within the band.

It came as quite a surprise to a lot of people when the original guitarist Peter Banks left the band, but after a little time with his replacement Steve Howe there was little doubt that it was a change for the better. Banks was good, but Howe is perfect for the band as they are at the moment, and you feel that he has great reserves of ideas that could contribute greatly to the development of Yes in the future.
He has a mastery of technique and an alertness of approach in his guitar playing that suggests he has a lot more to give yet.
Anyone who has seen the group recently will know just how effective their stage performance can be – they strike a fine balance between theatrical presentation (they look good, they use effects sparingly but in the right places, and they use lighting simply but well) and carefully presented but uncontrived performance of their music.

Now that they have established themselves and are at a point where they have achieved about everything that could be expected of the music they have been developing since their inception, Yes feel that the time is right to move out into a broader direction. Up to now it has been very much Jon Anderson`s band – based around his songs – but in the future they say that the others will have a lot more to do with the writing within the group. 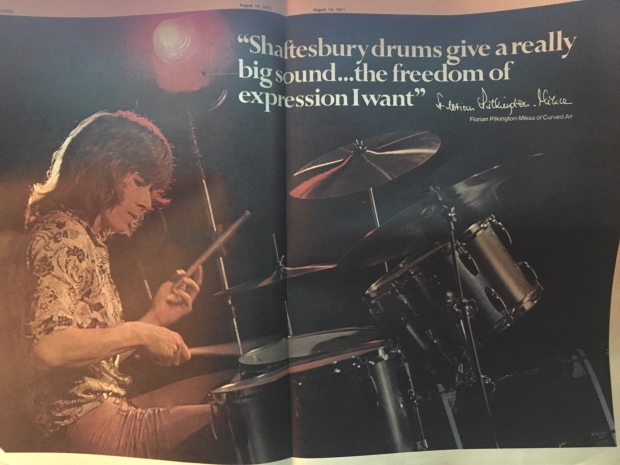