A great little interview with Elton where he mentions several of the great artists of the time. He also have some interesting remarks concerning the concert scene.
Enjoy. 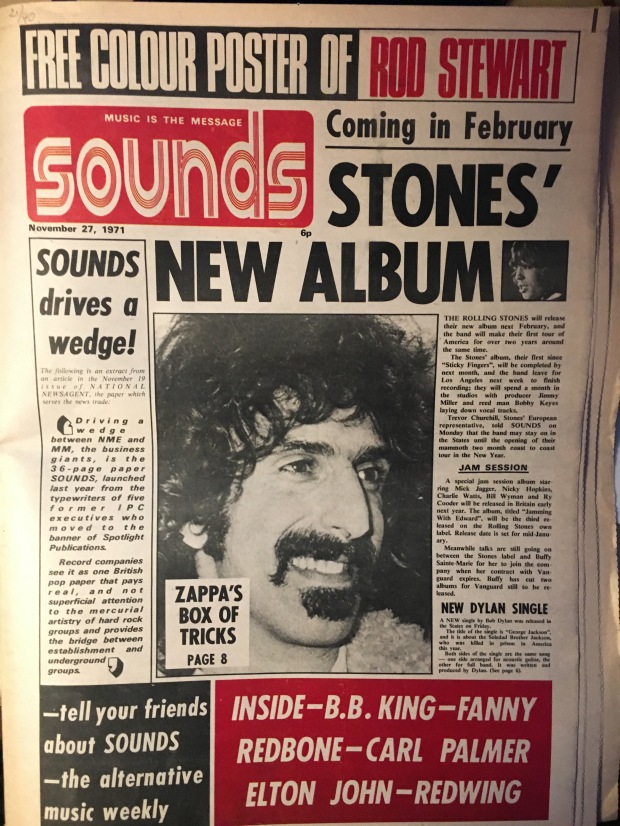 Elton – a madman slowing down…

It`s been a funny old year for Elton John. I mean from the things you read you might be led to believe that Britain`s number one feted superstar of 1970 came a right cropper in `71. All those put downs, all that cynical reaction, all that knocking because he fancies walking out on stage in a teddy bear bow tie and white boots, kicking his piano stool away a la Little Richard.
Not on at all. British musicians should take their job seriously we all know that. People who actually look as though they`re enjoying themselves on stage always end up having a hard time. You`ve only got to look at Elton to realise why Bolan and Stewart weren`t going to be allowed to get away with it for too long. We build `em up and knock `em down in this country. Strange really. Remember Joe Cocker?
Of course Elton John has just returned from a complete sell out US tour, of course he did fill the Greek Theatre in LA every night for a week. Of course this time last year he did have four albums in the US charts at the same time (which nobody deigned to mention much) and he is one of those rare British artists who can pull in 10,000 people a night minimum in the States – can 10,000 people a night be wrong?
The parallels between Elton, Bolan and Stewart are obvious. Although they all appeared to leap out of thin air on to the rock circuit the fact was that conversely they`d all bashed away for years trying to break ground. Because, then, they were all successful they`ve all been shredded into neat pieces by critics who somehow object to large scale success. The nature of their climb had given them only a good back-up to take all the rubbish thrown their way.
Unlike both Bolan and Stewart though Elton is basically much easier to get at. He`s a susceptible man, easily hurt, vulnerable, nervous even in the friendliest company. That he`s sometimes in danger of sounding a bit bitter about all the knocking is something that nobody in their right minds could blame him for. Wasn`t he, after all, lauded and feted on one hand – the Great White Hope and all – and then smashed down with the other?

On Wednesday he`s been back from the States for two weeks in which time he`s moved house, sorted out new recording plans, planned to add a new guitarist to his line-up and got ready for his British tour which opens this week and is a sell out. (In fact, Croydon`s Fairfield Hall said they could have sold out all over again.)
He`s lost a lot of weight and he`s toned down in his Yves St. Laurent shirt and trousers.
Elton John could, financially, give up his live work tomorrow and get out of the rock business for good – but it`s doubtful that he will just yet: “I still enjoy it and I`m certainly not going to pack up because I get knocked. I wouldn`t bow down to criticism in that respect”.

“Madman Across The Water” – his latest album – has surprisingly in a time when it really hasn`t been hip to praise him, had very good critical acclaim. It may well be the last orchestrated album he does. Paul Buckmaster wants to get into his own work and Elton himself feels he`d like to get back to pure rhythm section. After the tour he`s off to the South of France to record at the Stones` studio.
“I was amazed you know when `Elton John` came out that we didn`t get more haggled at for having an orchestra on it after `Empty Skies`. And although `Tumbelweed` did get more attacked on that score in fact there were only a couple of tracks – like `Burn Down The Mission` – where the orchestra came up on a large scale. Gus (Gus Dugeon) and I have already talked about the next album and we want to get back to basic sound. I mean I`d love to do a Rod Stewart or Neil Young type of album – it`s time for a change.
“Adding the new guitarist next year will give us more scope I think. We`ve proved better than anyone that piano, bass and drums can make it in a loud rock act, but there`s hardly any room for solos at the moment. I have to provide rhythm and solos on piano which is a bit of a drag and I think someone fresh in the group will take a bit of responsibility off me and give us a new lease of life.”
Future plans also include cutting out a great deal of the leaping about and extrovert stage act which Elton thinks has turned a bit sour on him over the past couple of months. I ask him if this is due to the criticism he`s had which has markedly pointed out its distaste with such paraphernalia… 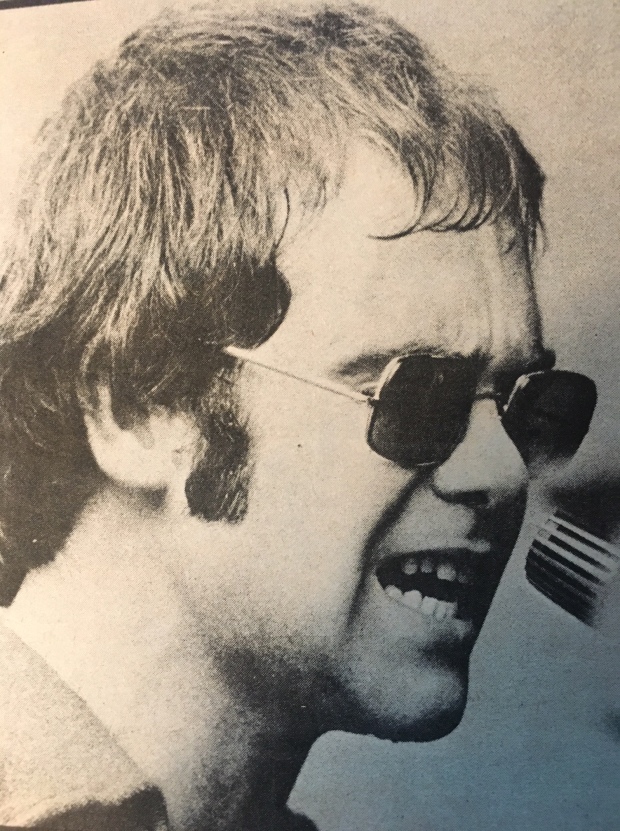 “No. I just like getting credit for what we`ve done and nobody seems to be doing it. We have been very successful in the States and I want people to own up because they tend to ignore it here. That kind of thing does upset me. I got very upset for the first couple of weeks and then the criticism reached a very bitchy level. I don`t mind album criticism which can often be helpful, but when they started saying things like Lesley Duncan`s album was okay even though I was on it – well that`s being bloody evil for the sake of it.
“The sad thing is that I`ve gone out of my way to be nice to everyone and I end up getting kicked in the teeth for it. Everything gets so out of hand in Britain. I mean all the dressing up started as a joke, something for a laugh, a spontaneous thing, and people have taken it seriously. They must be joking mustn`t they? The only thing about stopping the leaping about is that I think it stopped being spontaneous. I mean everyone knows now that at a certain point in the evening I`ll kick the stool away and go into frenzied antics. It`s wearing a bit thin – it is for me anyway.”
Whatever the decisions, the criticisms, whatever the future 12 months holds one thing`s certain – and that`s that the British rock scene should hold on hard to artists like Elton John. He is one of the very few musicians we possess that have brought the audiences back into the theatres and the main reason he`s done it isn`t simply by the music alone, good though it is, but because he brought with him some colour and excitement so sadly lacking in British music.
“The rock scene is stagnating in Britain. Since I`ve been back the only three new albums I`ve liked have been from America, Lindisfarne and Yes. There`s so much rubbish around. Music has become too technical and precise – I think I`ve been to blame too as far as records are concerned. It`s lost all that lovely rawness. T. Rex and Rod Stewart`s albums are the best rock albums I`ve heard all year – just raw raucous rock and roll. I think one becomes too polished and the awful thing is that there are no bloody young musicians bringing that energy back into music. Free were about the only new young band that were doing it and they went and split up.

“Why aren`t there any new musicians? Well for one thing it`s a bit of a closed shop – more a case of who you know. And I think it`s hard for a new band to get off the ground here. They have to flog themselves to death for two years before they have a chance and the prospect un-nerves kids that might come in. Anyway most of them are into football now – the kind of age group that were playing guitar when the Beatles started now go to football matches.
“Now it`s just a job and everyone`s saying `Oh how much advance are we getting on the album`. There`s no magic left. I mean James Taylor`s the biggest name in the world but he`s not really exciting, he`s a bit of a wet fish really to see live. I`m sure this is a reason festivals are dying – who do you put on to draw real crowds? The last two festivals I went to were Dylan at the Isle of Wight and the Stones in Hyde Park. They hit directly they came on stage. But the big artists that have come up in the last couple of years just don`t have that same identification. Fairport are very entertaining and I like watching them, so are the Faces and T. Rex. That`s about it. Marc Bolan is really our only hope if he can keep it up and forget about the knocks – and how long`s it taken Rod Stewart for god`s sake?
“These people are the new sex idols if you like, and it`s just as well they`re around. Well I`m not, that`s for sure. I don`t know where I belong”. He smiled suddenly for the first time in the conversation: “People seem either to love me or hate me but then I`m not so sure I`m not happy about that really.”