Despite some very famous friends helping Frampton on this album, he had little commercial success with his first solo album after quitting Humble Pie. There are very few examples of someone leaving a fairly successful band and achieving even more success as a solo artist, so Mr. Frampton took a very big chance when he left Pie for his solo career. As we all know now, he was one of the few that actually surpassed his former band, selling eigth million copies of his live album alone. So very rarely, in this instance, a gamble gives you a solid reward. Nice one, Pete!

Six months ago Peter Frampton made a major decision and split from Humble Pie. He has never regretted that decision but naturally it brought with it a huge responsibility to establish himself individually. At the time he was exhausted after finishing a gruelling last US tour with the band and was, he said, “scared stiff and very excited”…
Next month the results of Peter Frampton going it alone will be released for the world to judge in the form of  an album titled “Winds Of Change”. The nerves have gone, the excitement has grown and last week in his London home Peter Frampton sat relaxed, confident and happy. And having heard just a few tracks from the debut selection I can`t say I`m surprised.

Without a doubt “Winds Of Change” is a fine album and I wouldn`t be sticking my neck out if I said that it will establish Frampton as one of the best solo musicians, artists and composers to have come out of British music.
“It`s succeeded” he said happily “Beyond my wildest expectations. I more or less came straight off the road last year into the recording studios so it got to the point where I`d cut about nine tracks and I was feeling very stale. So Mary and I went away for two weeks holiday and when I came back I played the stuff we`d cut back again and, oddly, I was knocked out by everything. I mean oddly because most musicians come back after a break and normally dislike everything they`ve done.
“All I changed was two tracks where I got Del Newman to add some strings. It`s incredible the difference the album`s made, I feel ten times more confident that when I left Pie. I know that album is ME and with that behind me I can get on with what I want to do”.
The next step being, in fact, the formation of a band to take out on the road. Again Frampton is being careful. He is in the happy position of being able to take his time from a financial position and if he is being pressured at all then the majority of that is his own eagerness to get back into live appearances:
“I`ll probably start finding people that are free around June, after the album`s out I know who I want and if it takes longer to wait until they can come in with them then I`ll wait. I don`t want to make a mistake like last time. I want people I can get along with because I want to start in America and I think one of the most important things with a band, when you`re consistently in each other`s company on the road, is that you`re happy together.” 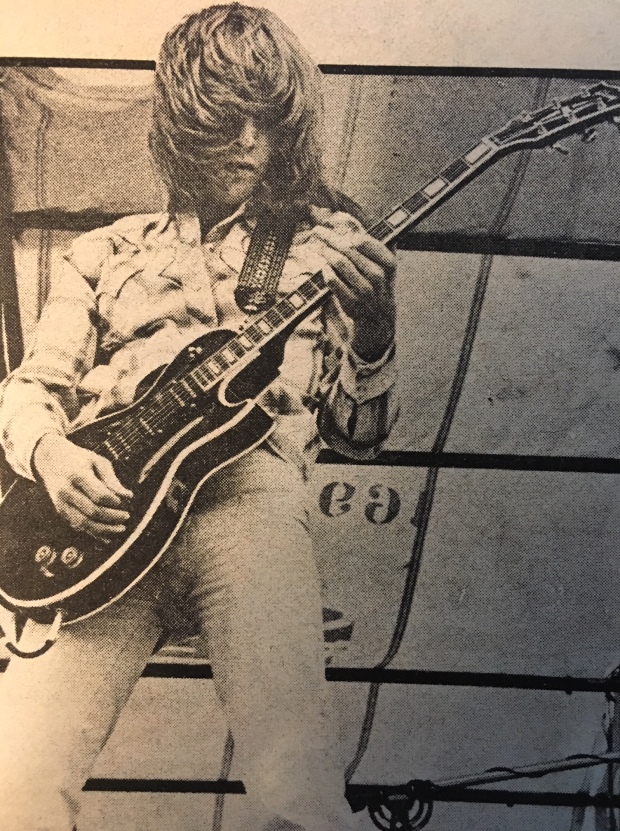 Was he worried at all that with people like Ringo Starr, Klaus Voorman and Billy Preston on “Winds of Change” he might come in for the usual `superstar line-up` sniping from critics?
“Not really – I mean Ringo, Billy and Klaus were only with me on two tracks. For the rest I used Andrew Bown (an old friend from the Herd days), Mike Kelly who I`ve worked with a hell of a lot and who is a really good drummer and a US guitarist called Frank Carillo that we met in New York when Steve broke his guitar once. I used him as second guitarist and he really helped enormously. The only other musician I had was Ricky Wills, who came in when Andrew couldn`t make it. He`s a very tasty bass player rather like Greg Ridley.
“It`s funny I did change my mind about using my own material. Initially I thought I`d probably do very few of my own songs but in the end the only track I didn`t write was `Jumping Jack Flash` which we did without listening to the original. In fact Andrew and I were sitting in this very kitchen half an hour before the session working it all out.

“I had a lot of material I`d either written during Humble Pie or when I`d just left but a lot of that didn`t really seem to be fresh enough. I think the number that really started it was something I wrote called `The Lodger` which was about the time Mary and I moved into this house and 3 or 4 other people seemed to move in with us. I wrote a chord and then a line, and it all happened at once.
“Mary wondered what the hell I was up to – locked upstairs writing and killing myself laughing. It was the first track we cut and it really seemed to break the way open for the rest of the album”.