A really good one for fans of Geordie or maybe of Brian Johnson in AC/DC. This one have some interesting thoughts from Brian at the end of the interview.
Band leader Vic Malcolm was the great songwriter of this band and he was still writing great rock music as late as in 2014 with his band called “Dynamite”. If you like no-nonsense rock`n`roll in the style of AC/DC, this is the band for you. Check them out here: https://youtu.be/cOu1BJy4GLk

Don`t be fooled by the name

Brian Johnson, Brian Gibson and Tom Hill when they`re together never stay quiet for very long.
Last week they were assembled at their manager`s office for a swift interview before it was time to go on to Lansdowne recording studios where the finishing touches are being added to the new Geordie album. Absent from the little gathering was the groups mainspring Vic Malcolm who Brian Johnson explained had virtually been living at Lansdowne the past couple of days “Just to make sure everything`s being done right”.
The two Brians and Tom, when they`re in good shape, virtually terrorise their manager`s clerical staff and their young, unsuspecting PR man into fetching cups of tea and satisfactory publicity shots respectively: “If that gets used in the paper Molina, I`ll bloody well sue you”, Tom Hill forewarned the PR man who in turn said nothing but slipped the offending pic into an envelope and handed it over to me to use if I so cared. The whole thing, though, was carried out in good, clean cat and mouse type fun which is the norm whenever any of the Geordie`s are around.
Before being asked to join the group by Vic Malcolm little more than a year ago Brian Johnson had never played a pro gig with a group in his life, though he`d been with a long string of semi-pro Newcastle groups and had got himself a healthy reputation as a rock vocalist: “Vic came to my house one night”, Brian carried on through his undiluted goerdie accent, “He said he liked my singing and all that but he said I just stood there like a sack of tatties. That`s what he said. Anyway, after I joined the whole stage thing came very easy to me. I get up to things on stage now that I`d never dreamed of a couple of years ago.”

It might be a fair guess to say that Geordie`s apparently unbounded enthusiasm and love for the music business could well be down to the fact that they have achieved no mean measure of success in a comparatively short space of time. In the past year, they`ve released four singles, all of which notched up impressive sales: “The first single to break for us, which was `You Can`t Do That`, broke the bottom end of the charts towards the end of last year. At that time we had a lot of really good luck – good gigs, the ones which matter, and after the discos had picked up on the record it spread to the radio and that gave us a lot of exposure.”
Basically Geordie feature mostly Vic Malcolm songs (all the singles have been written by him), and their few diversions into non-group songs have all been given Vic`s arrangements. The immortal “Geordie`s Lost His Liggie” from the first LP, being probably the best example.
“All the songs on the new album,” said Tom Hill, “have been written by Vic, though this time the group have contributed much more in terms of coming up with ideas at recording sessions. The only non-original song we`ve done is “House Of The Rising Sun” which we`re very pleased with. It follows pretty close to the way The Animals did it but our version is a bit heavier – it`s punchier.”
Geordie, much to their disillusionment, still find themselves being compared to Slade more often than they feel is justified. No one disputes the similarity of appeal between the two bands which, when you come to think of it is probably the reason why the two were billed together at a London Palladium concert last year. Of course, at that time Geordie hadn`t yet experienced their first hit. Close listening to the Geordie albums show Vic Malcolm as a talented composer of pop songs plain and simple and his style really is a long way removed from Noddy Holder`s impact which has tended to remain on the same level throughout all the major Slade singles hits. True, the production strokes that are pulled on Geordie`s behalf may discolour the argument but beneath it all they have the feel of a band who deserve their glitter the same as anybody else. 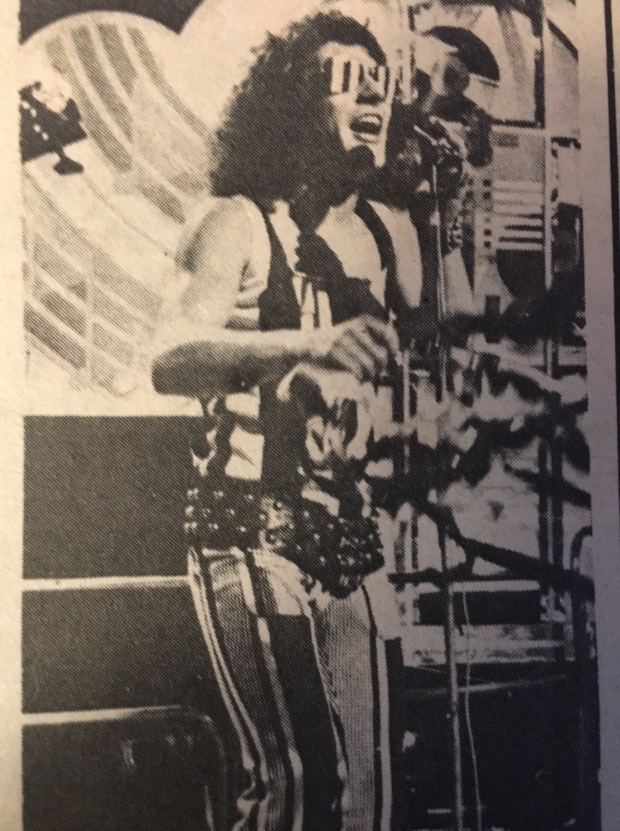 The next Geordie album following “Don`t Be Fooled By The Name”, Brian J. says, will be a live one. They intend to record it early next year at a gig in Newcastle City Hall, a venue the group have never yet played as their past home appearances have always happened at the cosier Mayfair Ballroom where they have been No. 1 draw for the past year or so.
“A live album,” said Brian, “is something I`ve been looking forward to. There are things we get into on stage musically that have never happened in the studio. There`s this certain song that goes down no bother live but we tried to record for the album last week and I couldn`t hit it. I tried handling it everyway I knew how but it just wasn`t right. Obviously the band is naturally happier playing live than recording, though we record a lot easier than we use to. And to do the live album in Newcastle should be something else.”
Geordie have already had one abortive attempt at an American tour earlier this year. Brian, however, seems in no great rush to reach US audiences because his canny Newcastle common sense tells him: “By all accounts Slade died in America. I hear they went down well in and around New York but outside that area they died. Now if people are comparing us to Slade in this country the chances are we wouldn`t do too good in the States – and that means losing a lot of money.”

We are on to a very special issue of Sounds here. Looking through it I realised that I may have to write a record number of articles from this one. It is almost like an early issue of what later became the best rock magazine in the world – “Kerrang” (In the early days). So many nice articles that I`m almost drooling. And we start of with a bit of gold here – an article with the band that later lost their vocalist to what was to be one of the greatest rock bands in the world ever. But they were far away knowing anything about that at the time. Enjoy!

“A good solid driving beat and lots of pure unadulterated excitement,” was the description put on the new single from Geordie in last week`s SOUNDS by one Gavin Breck in his appraisal of what records would be most likely to turn on the nation`s discotheque customers this year.
As it happens Geordie have already notched up quite a few singles sales with their debut record, “Don`t Do That”, which gained rapid approval on its release in the latter half of last year and as a result planted them firmly in the minds of lovers of no holds barred, undiluted rock.

The band, a four piece, comprising Vic Malcolm, guitar; Brian Johnson, vocals; Tom Hill, bass and Brian Gibson, drums; were formed by Vic in Newcastle last February. Brian says that, individually, they`d all previously played with various semi-pro lineups in Newcastle but that they`d rapidly become disillusioned with the lack of work in the area available to semi-pro groups: “Then Vic got this band together,” Brian explained, “and suddenly we seemed to be working every night of the week. The change was incredible and we were forced to learn things in literally a matter of weeks what most other bands learn in a year. The single took off very quickly, almost as soon as it was released, because the radio DJs picked up on it and that`s something, I suppose, we should be very thankful for.”

Brian describes the group`s recent appearance with Slade at the Palladium as the most important gig of their career so far, though he admits their biggest following still centres around the Northern ballrooms and that they`ve yet to consolidate their following: “London,” says Brian, “isn`t the easiest place in the world for a band like us to break in. I know that audiences aren`t so blase as they used to be and that everyone`s into raving a bit more at gigs but the few small London gigs we have played in the last year have been nothing like what we`re used to up North.”
The bulk of Geordie`s repertoire is written by Vic Malcolm who penned both “Don`t Do That” and “All Because Of You”, the group`s new single as well as all the material due for inclusion on their debut album released next month.
The group`s straight pop approach, Brian says, is unlikely to change in favour of anything more musically complex. “When we started playing the Newcastle clubs we had to play a few numbers which weren`t ours because the audiences seemed very wary of bands who played original material but gradually we began to sneak in Vic`s songs until we got to the stage where everything we did was our own and the kids were still going wild.

“In many ways the band is very self-critical and though most of our stuff is simple, straight down the line rock we realise that you`ve still got to keep trying for perfection. It`s something I don`t think many bands really care about but I think we`ve always been pretty conscious of it.”
Of the new single, Brian says it should have more commercial appeal than “Don`t Do That”, though it has a similar feel: “Hit singles are still the only way to get through to the biggest audiences. I think singles are also becoming more and more important to the rock business and you can see that through the number of really good ones that bands are putting out these days. The excitement that surrounds a really good hit single is quite an experience and I hope we`ll be experiencing quite a few in future.